“Every time you see ‘Wunderkeks’ on a t-shirt, the bright pink box on a kitchen counter, under the Christmas tree or on someone’s doorstep, you know you’re safe with it. these people,” says Luis Gramajo. , one of the owners of the Austin-based cookie company.

The bright pink box comes to life in a bakery in a northwest Austin mall. This place filled with the sounds of machinery and the delicious smell of freshly baked cookies and brownies has become the home of the Wunderkeks and a safe space for its owners. Like their cookies, Luis Gramajo and Hans Schrei have uniquely sweet and warm personalities and strive to create that same environment with a bright pink box full of their decadent treats.

“The essence we find in Wunderkeks and everything we do is that we want to build safe spaces around our brand,” says Gramajo.

In their home country of Guatemala, the couple could not get married and struggled to express themselves. They gained the freedom to be themselves upon arriving in Austin, began selling their cookies at farmers markets, and realized how different the city’s culture was, evolving their packaging, brand, and mission. . Where the hot pink box in Guatemala encapsulated what little homosexuality they felt comfortable showing the world, they now have a brand full of weird elements ranging from colorful pom poms, a disco ball and a dinosaur with a pink tutu as a mascot.

In three years, the couple went from not knowing what a snickerdoodle was to baking brownies for Oscar goody bags and building relationships with people who became allies of Wunderkeks’ message.

One of those allies is Ben & Jerry’s Jeff Furman, who co-founded the ice cream company and is now president of the Ben & Jerry’s Foundation. He joined the Wunderkeks Advisory Board because he believed in their history and their mission, as he said, “touched his heart”.

“Recognizing the human value of this and our responsibility to each other to create and support the idea of ​​a safe space, especially in this country today, not only gay men and not only students but women , people of color and you start adding it all up, and that’s three quarters of the country,” Furman says. 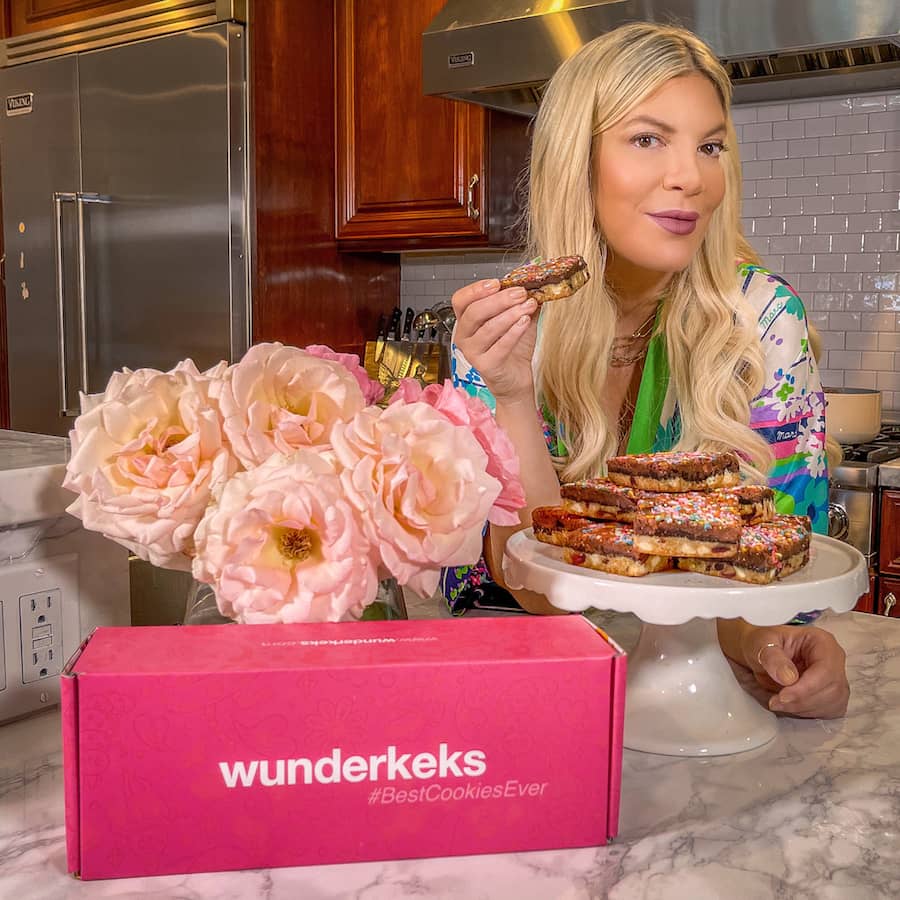 Like Furman, actress Tori Spelling (Beverly Hills 90210) also believed the cookie company story. She decided to join them in creating a new product, the Safe Space Brownie, which is now available to help you celebrate Pride Month, calling on everyone, queer and straight community alike, to celebrate with them and become allies.

“Allies have tremendous power that most people don’t know about. They could save lives,” Gramajo said.

Tori’s idea of ​​the Safe Space Brownie was to represent her family. Each of Tori’s children was asked to choose an addition, resulting in a layered treat consisting of half a chocolate chip cookie and half a brownie with layers of Oreo cookies, a secret mix of coconut/caramel/pecan nuts and vermicelli. Each layer represents one of the children, and the entire brownie represents Spelling, “because that’s what she is. She welcomes everyone into her world and creates a safe space around her,” Gramajo said. .

As they began celebrating Pride Month with their company over the past few years, they wondered if they were using it as an excuse to sell. But, after receiving messages from customers explaining how they used their products to show support for loved ones, they realized the power the bright pink box can have. They want to use their cookies and brownies to open conversations and make their voices heard, which leads them to have a new goal for this year’s Pride month: finding allies.

“Our idea is that you get [the brownie] as an ally to someone else to show support or if you need support to bring it to someone so you can ask for help,” Gramajo explains.

Creating those connections, spreading their message and creating a welcoming environment is what Wunderkeks has been doing from the start.