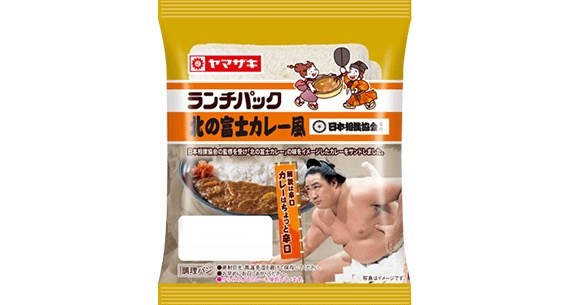 Battle Food enters the ring for the September Grand Tournament.

The new range has been produced to help celebrate the Grand Sumo Tournament in September, which will be held at the Kokugikan in Tokyo from September 11 to 25. Four new tasty products will be offered to us, inspired by a selection of gourmet specialties and popular souvenirs sold at Kokugikan.

The first offer is a new approach Yamazaki’s iconic “Lunch Pack”, the soft, crustless white sandwich that recently garnered worldwide acclaim during the Tokyo Olympics. This new lunch pack is called “Kita no Fuji Curry Style“, as it is filled with the same retort curry that is one of Kokugikan’s most popular souvenirs.

▼ Kita no Fuji Curry is popular not only for its great taste, but also for the fact that it was made by a former Japanese professional sumo wrestler Kitanofuji Katsuaki.

The next item in the lineup is the Kokugikan Yakitori Flavored Bread. We love to eat charcoal-grilled yakitori skewers whenever we can, so we can’t wait to experience the taste of this yakitori-flavored bread. According to Yamazaki, it has the same flavors as the Kokugikan’s basement grilled yakitori, including the same style of sauce and a mayonnaise-flavored dressing.

Then we have the Oiri Anpana bread stuffed with sweet red bean paste that plays on the word “Oriwhich can be read as “big filler” and “big entrance”, although it is used to mean “general public” in the sumo world.

▼ The bread itself has a big filling, as it is said to be filled with red bean paste and sweet, sticky mochi rice cake.

The latest product in the new range is the Hakkei Dorayaki, which contains a mound of tsubuan (coarse red bean paste) sandwiched between large dorayaki, a Japanese candy that looks and tastes like pancakes. This treat is deliciously buttery and has received the stamp of approval from Onokuni Yasushia former yokozuna (highest-ranking sumo wrestler) who became famous for his love of baking and baked goods since retiring from wrestling.

Yamazaki’s line of sumo baked goods will be available in stores nationwide from September 1-30. Wearing the top knot headband while you eat them is optional.

Source, images: Yamazakipan
● Want to be up to date with the latest articles from SoraNews24 as soon as they are published? Follow us on Facebook and Twitter!