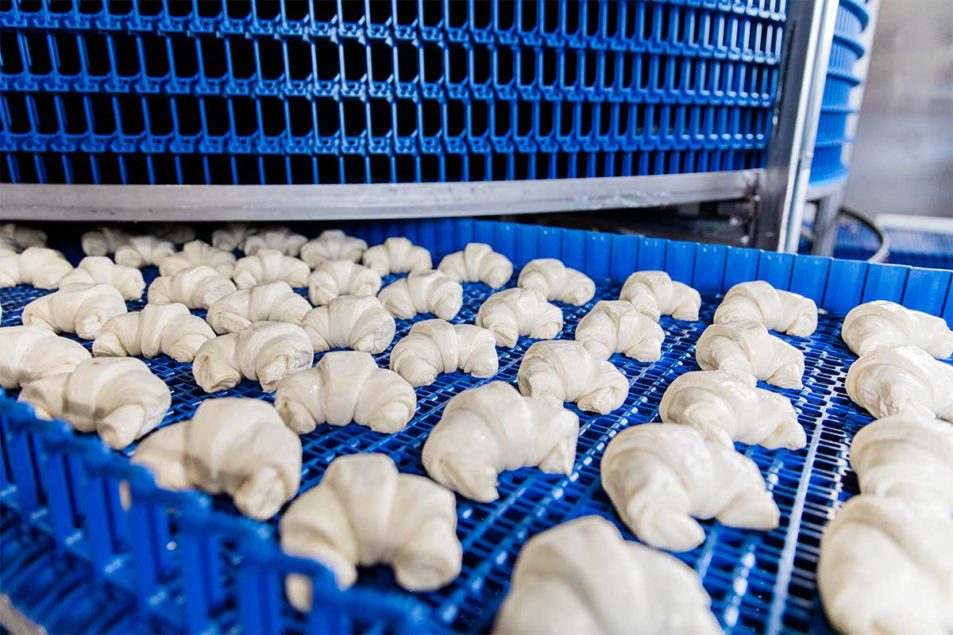 Jonathan Lasecki, director of engineering at Ashworth Bros., recommended stainless steel belts for blast freezers, although the company is also exploring the development of plastic materials that can be used in such applications.

“At extremely cold temperatures down to -200°F, plastics can become brittle, so stainless steel is the best material to retain mechanical properties,” he said.

Maintaining airflow around the product is the key to potential energy savings by reducing the time needed to effectively freeze baked foods. Ashworth offers the Mono-Planer Omni-Grid and the Tight Mesh Omni-Grid for spiral freezers.

“The density of the mesh surface is key,” Lasecki said. “If you can keep frost from building up on the belt, you can reduce your freezing time because you have better airflow.”

Upright tunnel freezers, he added, can feature wave technology that mechanically vibrates the belt to prevent baked goods from sticking to it.

“It’s like the scene in ‘A Christmas Story,’ the movie where the boy puts his tongue on the telephone pole when it’s -20℉, and it sticks,” Lasecki said. “You have to look at vibration solutions and other types of applications. We look at the mesh design to minimize frost on the belt and sticking.

“By putting both in one package, you can get up to 35% more production with the same footprint compared to a conventional cryogenic tunnel freezer,” said Dan Morgan, Director of Markets for the food and beverage at Messer.

Bakers also don’t have to line produce or pre-crust the bottom of baked goods to prevent sticking, he added.

Meanwhile, Linde offers the new generation of high capacity Cryoline CWI freezers which combine IQF vibration movement with patented impact technology. This system uses nitrogen as a coolant, providing heat transfer rates two to three times higher than standard tunnel freezers and making the application up to 20% more efficient, according to the company.

To minimize product sticking, David Bogle, Lead Engineer, Spiral Platforms, Intralox, suggested bakers explore acetal belting due to its resistance to temperatures as low as -50°F in spiral freezers. If there are fire hazards before a freezer, such as an oven, an Intralox fireproof belt called SELM may be chosen.

“Modular plastic belts require less energy to move because they weigh less and have lower friction values,” he said.

He added that the company’s engineers can consult on a bakery’s freezing process to potentially save energy and eliminate airflow losses so products can be cooled more efficiently and quickly. Intralox DirectDrive systems provide a positive-drive scroll that drives 70% less tension than friction systems and eliminates overdrive, which is the number one cause of unexpected scroll stops.

“As a greener economy increasingly becomes a reality, electricity generation from renewable sources can indeed be an asset in providing partial protection against energy price volatility that affects the cost operation of industrial freezers,” said Nicola Menardo, President of TP Food Group. North America, the American branch of TP Food Group. “Furthermore, from a tax perspective, investments in renewable energy can generate savings whenever governments provide incentives for ‘green transitions’. ”

Eliminating unnecessary downtime is another surefire way to improve the efficiency of a freezer. However, who knows what problems lurk behind the closed doors of a spiral system or inside a tunnel operating in arctic conditions?

Mr Bogle said running to failure always costs a lot more money in the long run. Intralox offers real-time tension monitoring to help identify early problems with spiral belts. In the event of a breakdown, modular plastic belts can be repaired without special tools or the need for post-repair disinfection.

Mr Lasecki said Ashworth’s Smart Spiral system monitors key operating parameters of a spiral system and can be adapted for use on straight stroke systems.

“With the Smart Spiral, plant maintenance and engineering can monitor the health of a system and note changes that occur over time that indicate failing components,” he said. “This information enables failed components to be repaired before a catastrophic and costly surprise failure occurs.”

Ashworth Bros. has recently extended its monitoring systems to other parts of the production line with its Smart Oven predictive maintenance system with vibration, zone temperature and heat resistant gas usage sensors in another type of extreme conditions.

“As long as the sensors can collect the data, the system can tell you the performance of the equipment you want to monitor,” Lasecki said. “It’s like a car. When you start it in the morning and hear a growl and growl, you don’t just say “OK”. It starts, and go to work. I hope you say, “Wait. Let’s get this figured out. Maybe there’s a bearing going wrong. Let’s look a little deeper and not wait until suddenly it doesn’t start. It all comes down to being aware of your gear, and it’s all part of sanitation and maintenance.

This article is an excerpt from the September 2022 issue of Baking & Snack. To read the full article on cooling and freezing, Click here.